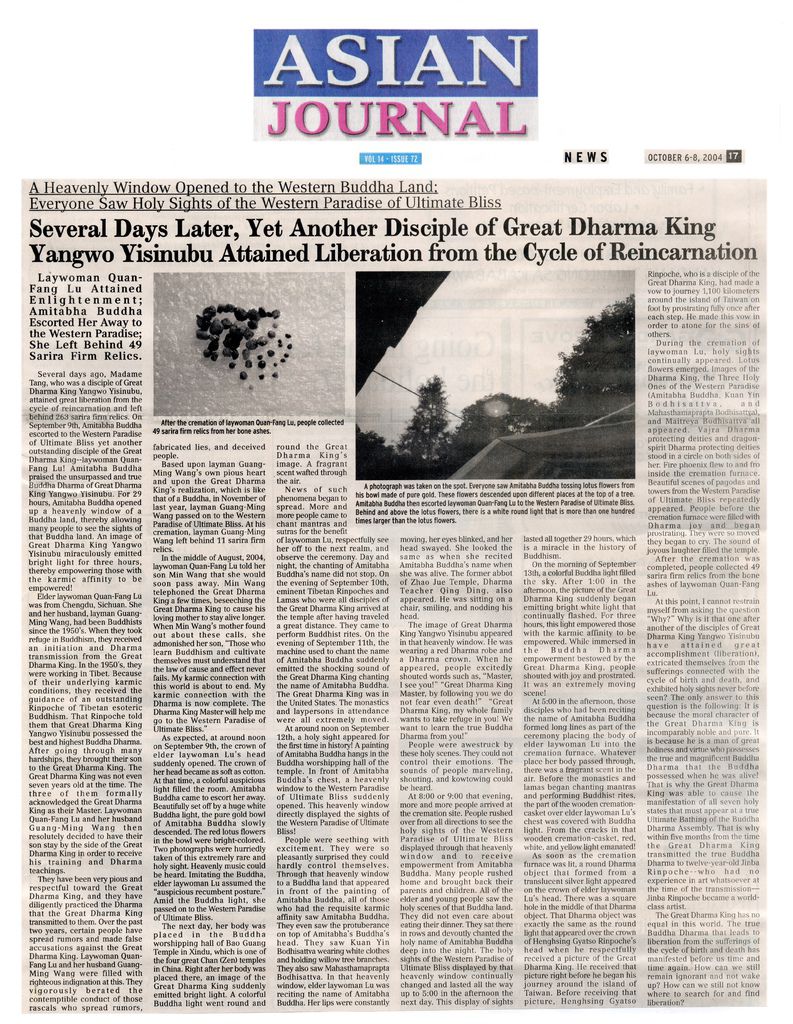 A Heavenly Window Opened to the Western Buddha Land:

Everyone Saw Holy Sights of the Western Paradise of Ultimate Bliss

Laywoman Quan-Fang Lu Attained Enlightenment; Amitabha Buddha Escorted Her Away to the Western Paradise; She Left Behind 49 Sarira Firm Relics.

In the middle of August, 2004, laywoman Quan-Fang Lu told her son Min Wang that she would soon pass away. Min Wang telephoned the Great Dharma King a few times, beseeching the Great Dharma King to cause his loving mother to stay alive longer. When Min Wang’s mother found out about these calls, she admonished her son, “Those who learn Buddhism and cultivate themselves must understand that the law of cause and effect never fails. My karmic connection with this world is about to end. My karmic connection with the Dharma is now complete. The Dharma King Master will help me go to the Western Paradise of Ultimate Bliss.”

As expected, at around noon on September 9th, the crown of elder laywoman Lu’s head suddenly opened. The crown of her head became as soft as cotton. At that time, a colorful auspicious light filled the room. Amitabha Buddha came to escort her away. Beautifully set off by a huge white Buddha light, the pure gold bowl of Amitabha Buddha slowly descended. The red lotus flowers in the bowl were bright-colored. Two photographs were hurriedly taken of this extremely rare and holy sight. Heavenly music could be heard. Imitating the Buddha, elder laywoman Lu assumed the “auspicious recumbent posture.” Amid the Buddha light, she passed on to the Western Paradise of Ultimate Bliss.

The next day, her body was placed in the Buddha worshipping hall of Bao Guang Temple in Xindu, which is one of the four great Chan (Zen) temples in China. Right after her body was placed there, an image of the Great Dharma King suddenly emitted bright light. A colorful Buddha light went round and round the Great Dharma King’s image. A fragrant scent wafted through the air.

News of such phenomena began to spread. More and more people came to chant mantras and sutras for the benefit of laywoman Lu, respectfully see her off to the next realm, and observe the ceremony. Day and night, the chanting of Amitabha Buddha’s name did not stop. On the evening of September 10th, eminent Tibetan Rinpoches and Lamas who were all disciples of the Great Dharma King arrived at the temple after having traveled a great distance. They came to perform Buddhist rites. On the evening of September 11th, the machine used to chant the name of Amitabha Buddha suddenly emitted the shocking sound of the Great Dharma King chanting the name of Amitabha Buddha. The Great Dharma King was in the United States. The monastics and laypersons in attendance were all extremely moved.

At around noon on September 12th, a holy sight appeared for the first time in history! A painting of Amitabha Buddha hangs in the Buddha worshipping hall of the temple. In front of Amitabha Buddha’s chest, a heavenly window to the Western Paradise of Ultimate Bliss suddenly opened. This heavenly window directly displayed the sights of the Western Paradise of Ultimate Bliss!

People were seething with excitement. They were so pleasantly surprised they could hardly control themselves. Through that heavenly window to a Buddha land that appeared in front of the painting of Amitabha Buddha, all of those who had the requisite karmic affinity saw Amitabha Buddha. They even saw the protuberance on top of Amitabha’s Buddha’s head. They saw Kuan Yin Bodhisattva wearing white clothes and holding willow tree branches. They also saw Mahasthamaprapta Bodhisattva. In that heavenly window, elder laywoman Lu was reciting the name of Amitabha Buddha. Her lips were constantly moving, her eyes blinked, and her head swayed. She looked the same as when she recited Amitabha Buddha’s name when she was alive. The former abbot of Zhao Jue Temple, Dharma Teacher Qing Ding, also appeared. He was sitting on a chair, smiling, and nodding his head.

The image of Great Dharma King Yangwo Yeshe Norbu (H.H.Dorje Chang Buddha III)appeared in that heavenly window. He was wearing a red Dharma robe and a Dharma crown. When he appeared, people excitedly shouted words such as, “Master, I see you!” “Great Dharma King Master, by following you we do not fear even death!” “Great Dharma King, my whole family wants to take refuge in you! We want to learn the true Buddha Dharma from you!”

People were awestruck by these holy scenes. They could not control their emotions. The sounds of people marveling, shouting, and kowtowing could be heard.

On the morning of September 13th, a colorful Buddha light filled the sky. After 1:00 in the afternoon, the picture of the Great Dharma King suddenly began emitting bright white light that continually flashed. For three hours, this light empowered those with the karmic affinity to be empowered. While immersed in the Buddha Dharma empowerment bestowed by the Great Dharma King, people shouted with joy and prostrated. It was an extremely moving scene!

At 5:00 in the afternoon, those disciples who had been reciting the name of Amitabha Buddha formed long lines as part of the ceremony placing the body of elder laywoman Lu into the cremation furnace. Whatever place her body passed through, there was a fragrant scent in the air. Before the monastics and lamas began chanting mantras and performing Buddhist rites, the part of the wooden cremation-casket over elder laywoman Lu’s chest was covered with Buddha light. From the cracks in that wooden cremation-casket, red, white, and yellow light emanated!

As soon as the cremation furnace was lit, a round Dharma object that formed from a translucent silver light appeared on the crown of elder laywoman Lu’s head. There was a square hole in the middle of that Dharma object. That Dharma object was exactly the same as the round light that appeared over the crown of Henghxing Jiacuo Rinpoche’s head when he respectfully received a picture of the Great Dharma King. He received that picture right before he began his journey around the island of Taiwan. Before receiving that picture, Henghxing Jiacuo Rinpoche, who is a disciple of the Great Dharma King, had made a vow to journey 1,100 kilometers around the island of Taiwan on foot by prostrating fully once after each step. He made this vow in order to atone for the sins of others.

During the cremation of laywoman Lu, holy sights continually appeared. Lotus flowers emerged. Images of the Dharma King, the Three Holy Ones of the Western Paradise (Amitabha Buddha, Kuan Yin Bodhisattva, and Mahasthamaprapta Bodhisattva), and Maitreya Bodhisattva all appeared. Vajra Dharma protecting deities and dragon-spirit Dharma protecting deities stood in a circle on both sides of her. Fire phoenix flew to and fro inside the cremation furnace. Beautiful scenes of pagodas and towers from the Western Paradise of Ultimate Bliss repeatedly appeared. People before the cremation furnace were filled with Dharma joy and began prostrating. They were so moved they began to cry. The sound of joyous laughter filled the temple.

After the cremation was completed, people collected 49 sarira firm relics from the bone ashes of laywoman Quan-Fang Lu.

At this point, I cannot restrain myself from asking the question “Why?” Why is it that one after another of the disciples of Great Dharma King Yangwo Yeshe Norbu (H.H.Dorje Chang Buddha III)have attained great accomplishment (liberation), extricated themselves from the sufferings connected with the cycle of birth and death, and exhibited holy sights never before seen? The only answer to this question is the following: It is because the moral character of the Great Dharma King is incomparably noble and pure. It is because he is a man of great holiness and virtue who possesses the true and magnificent Buddha Dharma that the Buddha possessed when he was alive! That is why the Great Dharma King was able to cause the manifestation of all seven holy states that must appear at a true Highest Form of Bathing of the Buddha Dharma Assembly. That is why within five months from the time the Great Dharma King transmitted the true Buddha Dharma to twelve-year-old Jinba Rinpoche--who had no experience in art whatsoever at the time of the transmission—Jinba Rinpoche became a world-class artist.

The Great Dharma King has no equal in this world. The true Buddha Dharma that leads to liberation from the sufferings of the cycle of birth and death has manifested before us time and time again. How can we still remain ignorant and not wake up? How can we still not know where to search for and find liberation?

After the cremation of laywoman Quan-Fang Lu, people collected 49 sarira firm relics from her bone ashes. 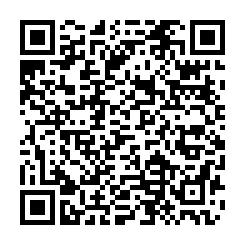